As I mentioned in my Hello World post it’s important for the choice to go with Tesla to make some kind of sense. I struggled with the math and finding the correct data and i’m not sure its all correct at this point so any feedback is more than welcome.

While the cars are totally different, my choice on getting a replacement car right now would be another Acura MDX or a Tesla Model S. The MDX has been a great car and I don’t really see anything better in the ICE world that would be interesting right now. We’ll get into options/configuration in another post but generally, despite what the auto manufacturer websites say, you only get the choice of a stripped down model or a fully loaded model so on my ICE cars i’ve always gotten the fully loaded version. With Telsa (thankfully given the fully loaded price) you can actually get just the options you want as each car is custom built to your order.

So configuring the cars as i’d expect i’d buy them, I ended up with the cost analysis below: 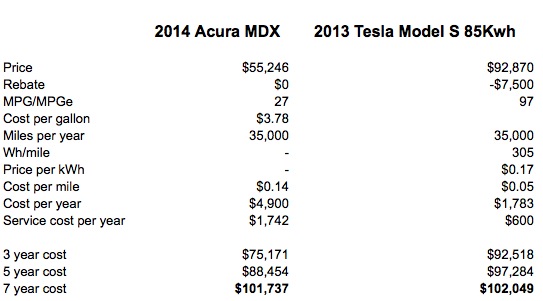 The price and rebate sections are pretty self-explanatory. Since I live in MA, only the Federal $7,500 tax credit is available. Also beware that you get that back (or credit) at tax time, so you’re still out that extra $7,500 initially (you have to pay for/finance the full amount less your deposit). The price is just with the options as described above. I’ll get into what i’m picking for the Model S in a later post.

Next is the MPG for the newer MDX (much better than my 2007 model) and the MPGe rating for the Model S. The MPGe rating isn’t used in any calculations. The fuel cost varies (and is different from my other post) — gas price is a rapidly moving target based on a lot of sentiment whereas electricity prices vary less.

For the watt-hour per mile this is an estimate. Its going to depend on driving style, driving aggressiveness, terrain, traffic, weather, and many other factors. After reading a lot on the Tesla forums I came up with this guesstimate. Some have a lot less, some have a lot more. For most people this will start out high and come down over time. Between learning the car and software updates I figure this may be a good 7 year average number. Time will tell on that.

Next you’ll see price per KWh. Where I live its $0.167/KWh which is much higher than the national average of $0.12 and even the MA average of $0.146. The chart on this page shows that New England is among the most expensive areas for electricity (perhaps also a reason Tesla has a light presence here). This cost didn’t help the analysis/justification any. A future move may be to add solar to my property.

The next line converts energy cost into an energy cost per mile then multiplies that by miles per year to get total energy cost per year. Using this math Gas is 2.75x more expensive than Electricity (and thats the most expensive premium Gas vs my crazy expensive electric).

Next I looked at non-tire/non-inspection service cost history over the last 6 years on my MDX (repeat from my first post):

Its been rising over time with an average of $0.04976/mile over the last 6 years. Much of that has been ICE related issues (oil, check engine, belts etc). There’s not much to go on for how much Tesla service will cost other than the optional annual service of $600. While they say every year or 12,500 miles does that mean I should get two services a year? Something to look into later.

Finally multiplying the annual costs of fuel and service and adding in the purchase price plus any rebates got me to the true cost to own for me of the MDX vs Model S. Perhaps it was wishful thinking that got me here but somehow i’m less than <0.5% difference between the two.

Some things that I haven’t accounted for:

As I get some answers to some of the above i’ll post some updates. Meanwhile if you see any errors in the logic, let me know.

25 thoughts on “Cost Justification – a tie?”