When the “D” Model S’s came out I took a look at  what it would cost to retrofit the Model S with the “D” features vs. trading in your current Model S. Now with the Model X available and the autopilot features fully available on the newer Teslas, people are starting to look at this math again and I wanted to share my thoughts.

A short while ago I configured a Model X and a Model S as I would buy them today. They came in at $103,200 and $88,450 respectively after available tax credits. For reference my current Model S cost me $92,443 after tax credits.

Understandably, Tesla does not offer a retrofit for the autopilot functionality or other things that are in the newer cars — if they did it would be prohibitively expensive! In the future Tesla or others may offer truly upgradable car hardware, but that day is not not here yet — Tesla only just changed the industry with real software upgradeability.

Reportedly, the math Tesla used to use to calculate trade in values was along these lines: 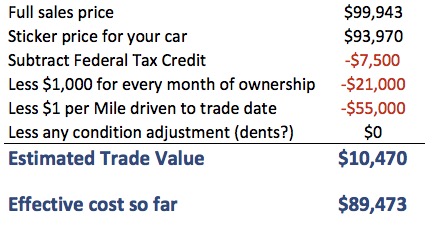 This is for my car with 21 months of ownership and 55,000 miles. Since I doubted this math still worked  ($10K!) and I was seriously considering the Model X or a newer Model S, I asked Tesla for a quote on my Model S.

This is a heck of a lot better than the original formula, but i’ve still used 48% of the original value in less than 2 years. At this trade in value, the effective cost of trading up to new X or S are $54,000 or $39,250 respectively.

I was curious if this was a normal price for CPO cars. There’s an excellent owner-run site called the EV-CPO Consolidator which provides a great deal of information about Tesla CPO cars.

Browsing that site you’ll be hard pressed to find a 2014 Model S with anything close to my mileage. The closest I found was a 2014 Model S in Los Angeles with 48K miles listed for sale at $55,600, just a bit above the quote I got. I don’t know if that car is in as good a shape as mine (i’ve seen some really beat up CPO cars), but the pricing, age and configuration are at least consistent with my quote.

If you can find a CPO car in good shape with reasonable mileage these are a great deal versus the original price and are still amazing cars. 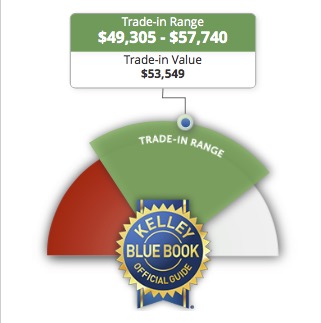 Next stop was Kelly Blue Book. Other than an odd bit where there was no option other than “AWD” for the drive train, it allowed me to pick the features and enter the mileage for my car. Their trade in value came in between $49,305 and $57,740 with an average around $53,549. My Model S, before taxes, was $93,970. So the trade in price per Kelly Blue Book is 57% of the original price.

If you believe the KBB quote, Tesla is on the low end of the trade in values. This seems to be consistent with some posts i’ve seen the TMC and Tesla forums and with Tesla’s overall mission — they’re not really in the CPO/used car business. If you find your own dealer and trade directly you can potentially increase your trade in value by up to about $5,000. If you sell privately you may be able to get up to $10,000 more over Tesla’s offer.

Selling privately can bring its own problems, especially in states like Massachusetts where there are cases where someone can buy the car, drive it for 7 days and then bring it back for a 100% refund (I’ve actually had this happen and its a nightmare!). There’s also the whole test drive, learning curve, etc. of the EV. Here in New England EV’s aren’t everywhere yet and the Tesla is still a rare car to see.

KBB trade in values are higher than Tesla’s trade in quotes.

To see what other cars “in the same class” as the Model S do for trade in, I first took a look at the Porsche Panamera S. I’m not very familiar with the models so I picked the E-hybrid Sedan and configured it similarly to my Model S. The average trade in value for that was $53,746 or about the same as my Model S. Configuring a Panamera will evidently drive you crazy but it seems that a new one similarly configured would go for $95,270 before taxes. So the trade in price per Kelly Blue Book is 56.4% of the original price, which is about the same as the Model S.

According to EVObsession, the Mercedes S-Class was #1 in the Large Car Luxury Market in 2014, but the Model S beat blew by it in 2015. I came up with a new price of $91,328 and an average trade in value (same mileage/year as mine) of $57,782 or 63.2% of the original price — the Mercedes seems to retain a bit more value although they’re still in the same range.

The Model S trade in value appears to be in the same ballpark as some of the other cars considered to be into the same class.

That first mile you put on your new car costs a great deal and that story is no different with Tesla than it is with any other vendor. Trade in values for Model S’s are in line with other cars in its class, although Tesla’s trade in offers tend to be on the low end of the spectrum.

If you’re looking to get top dollar for your used Model S, consider trading in to a company other than Tesla or selling your Model S privately. Both bring additional levels of hassle but can be worth the time if you have the stomach for it.

Maximize your cars value by trading in to another dealer or selling privately.

Even with an extra $5,000 over Tesla’s trade in offer, i’d still be looking at an upgrade cost of over $30,000 to trade up from my Model S (which is less than 2 years old) to the latest Model S. Are all-wheel drive, autopilot, upgraded seats, and all the other improvements and tweaks Tesla has made over the last couple years worth that? Perhaps, but I also love my Model S just as it is and its in great shape despite the mileage.

If the gap was closer perhaps the decision would be a lot easier, but in this range for me, and with the recent news that Tesla will be adding yet more hardware to autopilot in the future, I think enjoying my Model S is the right way to go.

Besides, with more Model X’s hitting the streets every day, the AWD “D” Model S’s will finally start appearing in the CPO inventory which opens up a new world of options.

Wait and see is probably still the best choice for those looking to trade up from an earlier Model S.

10 thoughts on “The cost of upgrading your Tesla”